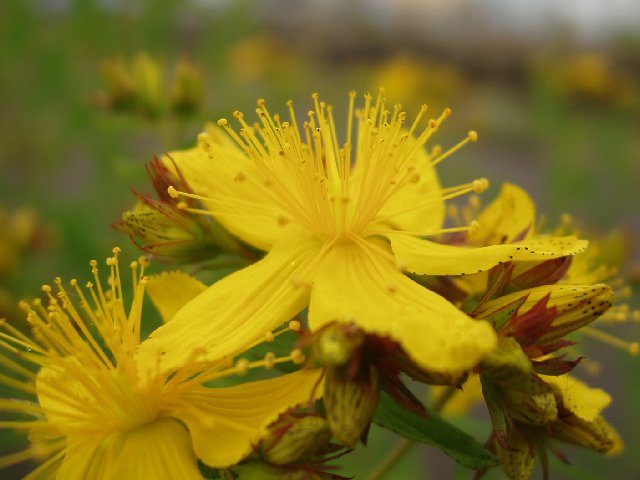 St John’s wort, plant of light – we think of it as a remedy for depression, but how much more poetic and inspiring is Charlotte Du Cann’s description, from her book ’52 Flowers that shook my world’ – “St. John’s wort is one of the great sun plants: a supreme universal connector” – and if you want a cup of St John’s wort tea after reading, I am open Wed-Sat 10-4…

“St John’s wort is a major herb of the European pharmacopoeia. It has been used for centuries as a nervine, as a sedative, analgesic and anti-inflammatory, a powerful tonic for the whole nervous system, for those suffering anxiety and hysteria. Recently it has been extensively employed as a herbal remedy for depression. Before industrialisation St John’s wort was understood as a plant of the spiritual realms. Its Latin name hypericum means “over an apparition” referring to the flight of spirits who found it obnoxious. It was used in exorcism, to chase ghosts and malignant spirits from the possessed and the “mad”. Even though most people don’t “believe” in spirits anymore, it is still used to calm those suffering from nightmares and for frightened children who wet their beds in the darkness of night. One of the main properties of St John’s wort is that it blocks the actions of certain conventional chemical drugs. It was this quality of preventing the conventional and the artificial in ourselves, in order that the intelligence of the sun may properly shine through, that formed the basis of the plant card:

“St. John’s wort is one of the great sun plants: a supreme universal connector. If mugwort is the doorway for the moon or intuitive, oracular self, St. john’s wort is the doorway to the sun or radiant self. This radiance may illumine and release even the darkest conundrum within yourself and by extension bring lightness and a sense of liberty to everyone you meet.

The radial structure of this plant is a clue to its effect upon the energy body: a sort of inner “architectural” expansion. Its own energy is extremely fast and dynamic and can accelerate the frequency of whomsoever comes within its field. From this perspective it is easy to understand why St. John’s wort is used by herbalists for depression. However if you wish to go deeper, to work at the root cause of this depression – rather than just “fixing” its symptom by giving yourself a sunshine boost – you will find it is related to a lack of interconnectedness with the living beings of the sun and earth, and the alienation and isolation felt by most human beings when cut off from this primal relationship.”